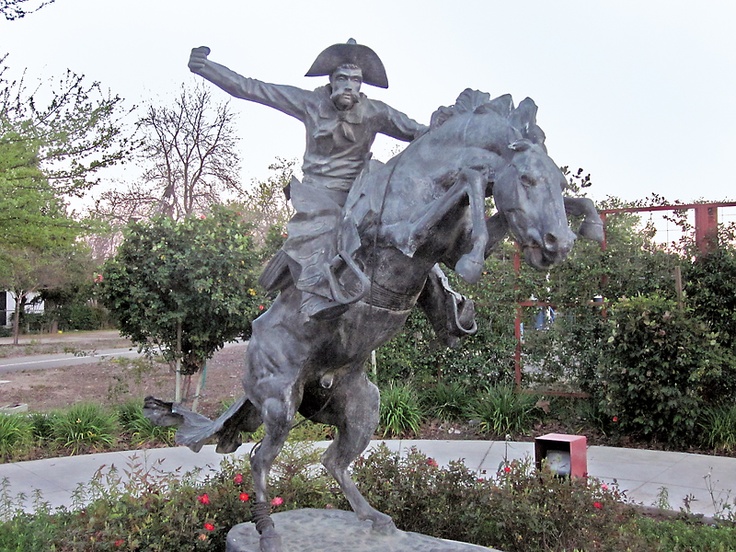 Clovis takes pride in embracing its heritage, values and culture and expressing it through artwork found along the Old Town Heritage walk and a variety of other locations throughout Clovis 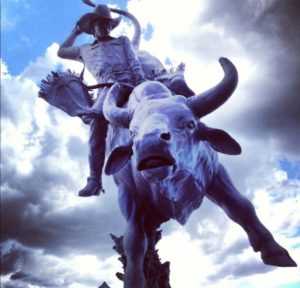 In 1987, the owner of a legendary, world champion bucking bull named Red Rock elevated the sport of rodeo to new heights by creating the Challenge of Champions competition. World Champion bull rider Lane Frost vowed to ride Red Rock, a bull that had never been ridden in 309 attempts. The event matched the two champion athletes in seven exhibition matches at different rodeos throughout the Western United States. The third match between the legends occurred at the Clovis Rodeo – forever tying together the legend of a cowboy, a bucking bull, and the Clovis Rodeo. 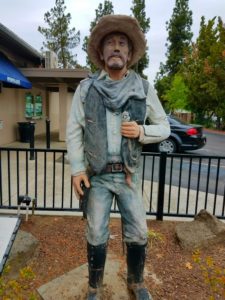 Clovis resident Ken Curtis is best known for his long-running role as Festus Hagen, the cantankerous deputy marshal from the television series ‘Gunsmoke’ from 1964-1975.

Located on the west side of Pollasky Avenue between Fourth and Fifth Streets. 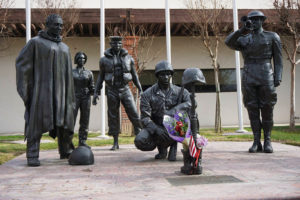 This bronze monument features six sculptures that pay tribute to each branch of the military. One soldier represents the Army in World War I; the Navy represents the soldiers that fought in World War II; for the Korean War, a marine kneels with flag in hand; the Air Force is represented by a Persian Gulf-era soldier; and, the member of the Coast Guard represents Vietnam-era soldiers. The final piece, a pair of boots, helmet and M-16 with dog tags, represents all of those who have lost their lives fighting for our country. 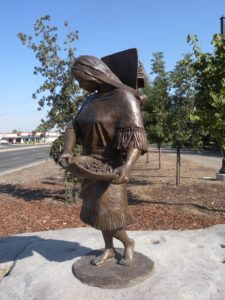 Long before any thoughts of settlement by non-natives in the Clovis area, many Native American tribes called this area home. They lived off the land that was often described as the ‘Garden of Eden’. More than 100 food resources were available to plant, harvest, and hunt. The Acorn Gatherer is a beautiful, depiction of a typical Native American woman as she gathers food and cares for her infant child. This original piece was designed under the careful supervision of local Mono Indian Tribe members. 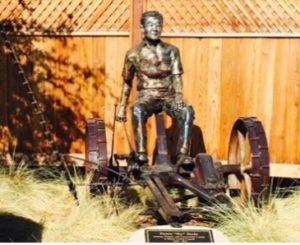 Japanese Americans have been a part of the Clovis Community since the earliest days of settlement. Their hard work and contribution to the region are celebrated in this life-size bronze piece. It was modeled after the real life Fumio “Ike” Ikeda, local pioneer, WWII veteran, farmer and community leader.

THE TIES THAT BIND 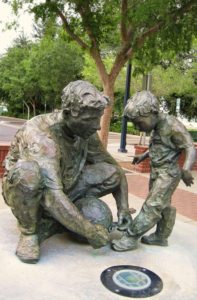 A father crouches to tie his young son’s shoe. It is a depiction of the family values that are so important to the Clovis community.

North side of Fifth Street, east of Clovis Avenue 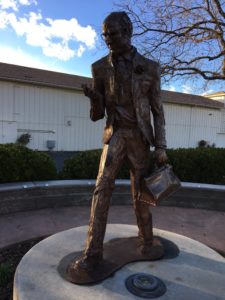 Harkening back to quieter times, an early Clovis doctor walks to make a house call to one of his patients. This bronze statue of the Walking Doctor pays homage to the Pendergrass family, who served Clovis in the medical community from 1912 to 1980.

North side of Third Street, east of Clovis Avenue 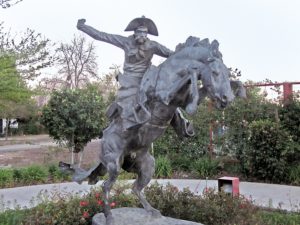 In 1895, Fredric Remington produced one of the most popular bronze statues in the world. Bronco (Broncho) Buster was presented to Teddy Roosevelt and it is displayed in the oval office to this day. In 2005, the City of Clovis proudly erected an over-sized replica of the famous Remington statue as a tribute to the City’s wild west roots.

East side of Clovis Avenue, south of Sierra Avenue.